If you are an app developer and wants to deploy and debug some applications or some android enthusiast who want to run or try new apps, whatever the reason might be. There is always some moment when you want to run some android apps on your windows or Mac. You can quickly run Android on your machine then there are plenty of paid and free Android emulators available to try and get the job done. 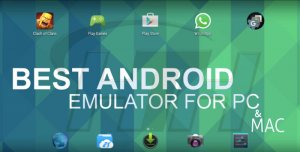 Remix Os player is an operating system based on Android x86 project which doubles as a fully functional android emulator for PC. If you need a free android emulator for mac which runs android marshmallow, then this is the best pick if you’re not interested to try any premium emulators. For windows, we have many alternatives we will talk about later on this list.

Once you download and install the remix os android emulator, it will greet you with windows similar interface. You can run multiple apps at once for smooth multitasking.

The primary advantage of installing Bluestacks is that it comes with preinstalled play store. Also installing and sideloading apps on Bluestack is a piece of cake! Bluestacks comes as both free and premium version; the free version is spammed with sponsored applications which pop up quite a lot.

AMIDuOS which is also known as DuOS is another Android emulator available in the market which is developed and maintained by American Megatrends, a Georgia-based company.

DuOS come with android jelly bean as well as the android lollipop, choose what you need, and you’re good to go! One thing you should know before downloading DuOS is that it won’t come with play store. Instead, you have to install apps from Amazon app market or sideload APK’s which is quite easy to do.

It is one of the most versatile Android emulators for pc as it can emulate any Android phone and any Android version — from Android 4.4 KitKat to Android 7.0 Nougat, you got it all. One thing to note that it doesn’t come with the Google Play Store by default, but don’t worry, you can fix this by manually installing GApps.

Genymotion also provides a cloud-based online emulator environment which might be helpful for cloud-based apps testing and deployment. In short, Genymotion is the perfect Android tool for developer needs. You can, however, use it for casual gaming, but we recommend you to try other emulators which offer game optimization, like Bluestacks.

Nox player is another great android emulator for windows platform, and it comes with play store preinstalled. The only downside of it is the old android version-KitKat

There’s also a new feature to “simulate touch” functionality which is just another name for keyboard mapping, and it helps you a lot when playing games. Also, it comes with a pre-rooted version of Android out-of-the-box, so if you want to try root-enabled apps, you can do that quickly here.

So, this is the end of best Android emulator for mac and windows users. We hope with this list, and you will undoubtedly find the best emulator according to your need. Which one of them is your favorite Android emulator for Windows? Also if you think we missed out some good android emulators for windows or mac users, let us know in comments, and we will add them!